A. More More Difficult Being An Aging Single Woman?
B. You're Not Alone 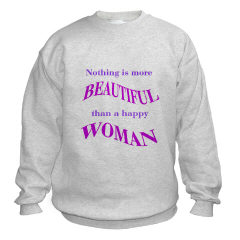 Shirts that say you are happy being YOU!

If you were to ask people in western culture which would be more difficult, to be an aging married or single woman, which do you think they would choose? Most would say married, for the simple fact she's close and personal with another human being having to maintain emotional balance between the two. However in some countries if the question were asked (and it is being asked), such as in India, most women would say being single was the most difficult life an aging woman could have.

According to an news article dated April 26, 1997 aging spinsters employed with the Tamil Nadu Government (India) sent in a petition, saying that they should have more pay in lieu of the maternity benefits that their younger married counterparts receive.This added pay would help provide the financial and retirement security they lack due to not having a spouse. "It will balance the financial security between married and single women groups, as well as, to encourage women to pursue singlehood as another life option."

In a signed statement, they appealed to the TN Governor to take their petition seriously and to lend support to their cause in the name of fairness. They have also urged the `gallant lotus crusaders' (fellow spinsters) to come forward to tell their stories, thus giving more validity to their fight. The petition stated married women are given `special privileges' -- maternity leave and expenses for being married as an effort to support the institution of marriage.

The spinsters who filed the petition went on to say they remained single for a host of reasons not always for their own personal convenience -- such as to take care of aged or sick parents, to bring up orphaned nephews and nieces, and or to pursue education or a better job. It is their reasoning, the problems of being aging unmarried women, to include societal stigma are many-fold compared to those of married women and they should be adequately compensated.

Do you think being an aging single female is more difficult than being married?

"The commonest and subtlest of all human diseases," a prominent physician said, "is fear." Fear is an incapacitating, paralyzing disease. We all fear at times, but many carry with them unnecşessary and destructive fears.

We're afraid of the unknown.

We're afraid of change; afraid to plunge into that new relationship, job or way of life.

We're afraid of the future.

We're afraid to risk; afraid to fail or apşpear as if we failed.

We're afraid of closeness; afraid we might get hurt.

We're afraid to die. Like Henry Van Dyke said, "Some people are so afraid to die that they never begin to live."

Fear is the most devastating enemy of huşman personality.

But here's the good news: unnecessary fears can be conquered! Courage to meet fear head-on is actually at our fingertips.

An American slavery abolitionist, Wendell Phillips, made an interesting observation. He noted that it is easy to be brave when all are beşhind you and agree with you. But the difficulty comes when 99 percent of your friends think you are wrong. Then it is the brave soul who stands up ľ one among 1,000 ľ remembering that one with God makes a maşjority!

You see, courage often comes from simply knowing you are not alone.

Regena
In my dancing circles there are a few women of near-enough my own age who look at me as if to say "You are so lovely, why are you so hard to get interested?" (You see that I value myself. And so I should!)

The immediate reason why I am so hard to get interested is because I have decided to go back to my native Northumberland, and I don't want entanglements which would stop that. But there are other reasons.

Despite the common belief that "men are after only one thing", that is not true of me, nor many I think men. Really, honestly, I don't want to pull up the skirts and pull down the knickers of every woman I meet. When I do feel that urge, it's always for a woman who I can respect myself for fancying. When I feel "fancy" for a woman, I always find that all the checks that I ought to make have already been made automatically: I believe that she is a thoughtfull, decent and honourable person, that she's my near-equal in personality and brains, a good sense of humour, etc, etc, all those things which wise women and agony aunts would advise - the boxes could be ticked, but there's more to it than that, there's this magic extra, which makes "Miss Right" stand out from "Miss Alright" and "Miss she'll do".

What is fancy? I really can't say, but like an elephant I recognise it when I feel it. I want to get closer, find out more, spend time with her, touch her, do things with her - and yes, do those things which would rightly be unlawful without consent.

Let me give you an example which has touched me. There is a divorced lady of my own age and financial circumstances who lives half a mile away from me. Because of that nearness, we often share a car to a dance. I think she is an understanding, decent and honourable person. She's not ugly, though neither is she beautiful. I could honestly tick all the boxes for her, She sometimes says that she dislikes living on her own, and when a couple in our circle got married recently she was positively teenage in her romantic delight. But I just don't fancy her. I have no urge to hold her hand or kiss her or do anything more intimate. Her very real virtues are wasted on me, they cannot pull in a good man who is nearby. It's as simple and as cruel as that. Her years go past with her needs unmet. I think she bears her lack with great dignity, she has stated her needs openly, to me and to others, but she has not behaved in any undignified or *desperate* way. I wish her well. I wish her a man. But that man can't be me!

This is contrast with another woman, who I think (and so do others) is a rather nasty bit of work. She has not borne her singleness with dignity. She is a bit older than me, and I think she has given up hope of getting a man, maybe, really, gave up many years ago. But giving up has not brought her peace. She cannot steer a straight course. She cannot keep a friendship going, she gets all close with a woman friend, then cools it off - she "blows hot and cold". She has done that with a string of women friends. (Am I better only because I *steadily* blow cold?) The standard thing to say is "She needs a man", and setting all sexism apart, I think that really is true. With a man she could then be a better person, but I couldn't recommend her to a friend. "To him that hath, shall more be given, from him that hath not, even what he has shall be taken away". Cruel words, but true!

Watch the ego.Keep in mind these are assumptions about people whose inner thoughts and feelings are not known. There are many in this society both male and female that find being single unacceptable especially beyond a certain age, therefore, finding dignity in being single is not something they can do. Quite possibly there are other reasons as to why both are single, one seems to enjoy her singleness like a teenager and the other appears to be embittered. Only these women know if they truly desire "a man" in their lives for loving relationships, or maybe they don't. Either way they can live happy lives regardless to their marital status it's their choice. Good fortune on your move to Northumberland.